Trinity and Beyond - the Original DVD Edition 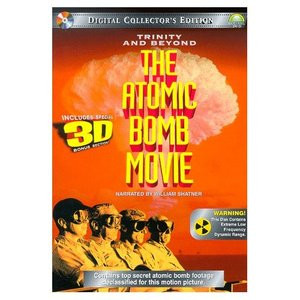 Trinity and Beyond - the Original DVD Edition

Original DVD version includes separate music tracks. Narrated by William Shatner (Boston Legal, Star Trek), Trinity & Beyond features extremely rare film segments from top secret government archives and startling footage of nuclear bomb tests conducted by Great Britain and China, plus the largest atomic explosion ever created by Russia. Whether being exploded under the ocean, suspended by a balloon, shot from a cannon or even detonated in space, these weapons are capable of devastating destruction - the quality of these images is as startling as are remarkable. This award-winning production also features an amazing explosion segment that must be seen with 3D glasses to truly take in its full impact. Trinity & Beyond features an original score performed by the Moscow Symphony Orchestra and an interview with Dr. Edward Teller a developer of nuclear weapons and one of the most controversial figures of the 20th century. Trinity & Beyond is an extraordinary production that provides an important understanding of events and the creations of technologies that have changed the world forever. Special Features: - Atomic Bomb 3-D Bonus Section - Live-Action Bomb Explosion with Actual Sound Delay - Mind-Blowing Photo Slide Show - Reference Chart of All The Nuclear Detonations by the U.S. Including Yields

This product hasn't received any reviews yet. Be the first to review this product!