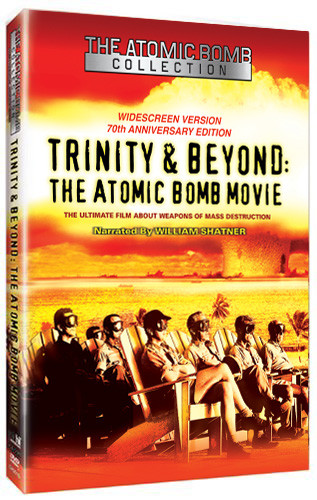 The Ultimate DVD Experience!  Now the DVD version is the newer, updated version as the blu ray

"Trinity and Beyond" is an unsettling yet visually fascinating documentary presenting the history of nuclear weapons development and testing between 1945 until 1963. Narrated by William Shatner and featuring an original score performed by the Moscow Symphony Orchestra, the film reveals unreleased and classified government footage depicting in graphic detail these powerful and awesome weapons. Many scenes were restored with an Academy Award winning process created to make the footage look new.

Director/producer Peter Kuran, traveled throughout the U.S. to locate footage that includes bombs being suspended by balloon, exploding under the ocean, being shot from a cannon and detonated in outer space. © 1995, 2015 VCEinc. Running Time: now 100 minutes!

Because of the new, longer length, there are no longer any extras added to this DVD.