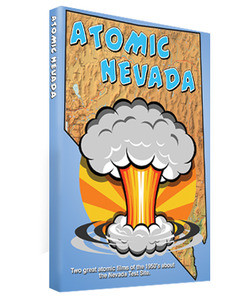 Two great atomic films of the1950's produced by Lookout Mountain Laboratories for the Dept of Defense and the Dept of Energy here together on one DVD.  Digitally restored.

Target Nevada, 1953
"Nevada, U.S.A.! This is the valley where the giant mushrooms grow. More atomic bombs have been exploded on these few hundred square miles of desert than on any other spot
on the globe!" - from the narration.

Atomic Tests in Nevada, 1955
Film made by the AEC for the population of St. George, Utah. "If you were driving from
Los Angeles to Salt Lake City on US Hwy 91, you'd pass through St George Utah..."
"...that great flash in the Western sky! An atomic bomb at the Nevada Test Site, 140 miles to the west. But it's old stuff to St. George, routine. They've seen alot of them,
ever since 1951. Nothing to get excited about."

This product hasn't received any reviews yet. Be the first to review this product!